A History of Standard Chartered Bank

Published by Penguin Allen Lane on 13 May 2021, Crossing Continents: A History of Standard Chartered Bank was commissioned by the Board of the Group in February 2011 and was many years in the making.

The front cover of its dust jacket (right) carries a photograph taken at the end of the 1890s. It shows four merchant vessels berthed in Calcutta’s Hooghly River. The busy riverside scene around them catches a flavour of the trading links that underpinned the British Empire everywhere across Africa and Asia – and that depended crucially, for well over a century starting in the 1850s, on the trade-financing capital and expertise of the City of London’s overseas banks.

Two of the foremost names among these overseas banks were the Chartered Bank of India, Australia and China on the one hand and the Standard Bank of South Africa on the other, founded respectively in 1853 and 1862. Crossing Continents traces their separate histories from the pre-1914 decades of the British Empire through the setbacks and world wars of the twentieth century.

The two banks were merged together in 1969 to form Standard Chartered Group, a business that its architects believed at the outset might logically build upon the commercial legacy of its forebears. Crossing Continents tells how this original vision almost came to grief over the next twenty years, and how it was then revived in the 1990s and substantially realised in some powerful and surprising ways.

The modern story, stretched across half a century, provides an unusual slant on the evolution of international finance in recent times and draws on more than 170 interviews with employees past and present. It complements the book’s account of the preceding hundred years, which make extensive use of the Group’s remarkable collection of archived records. These include Board papers which run without a break from 1853 to 2014.

Duncan Campbell-Smith’s sparkling new account of Standard Chartered Bank … is a door-stopping, desk-breaking heavyweight tome … of patient text and brilliantly evocative photographs. Campbell-Smith, a former banker and journalist, had access to Standard Chartered’s rich archive, and what emerges is work of painstaking scholarship. Multiple sources are woven together into a compelling record of imperial and post-imperial banking — Philip Augar in FT Weekend, 5-6 June 2021

If you are an FT subscriber, you can read the whole of this review by clicking here. 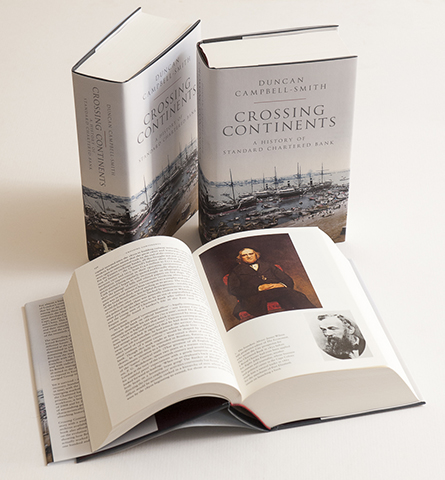